Ah, UEFA Euro 2016! A great sporting event… but also a great moment of communication for the brands! With more than 25 official sponsors active in France *, the European football mass sometimes looks like a pub festival. After a study of the forces present, the We Are COM team shares its TOPs and FLOPs with you!

TOP 3 that leaves us speechless

An elegant and endearing spot for the green bank, sponsor of the France team and French sponsor of Euro 2016. As a bonus, a nice happening of the brand "Le slip français", supported on social media by original activations.

Even if one wonders about the interest of the double partnership UEFA Euro 2016 only for France and the French team via the FFF, the device is simple and effective. From this advertisement - very frequently broadcast on TV - to collaborations with Youtubers and visibility in the stadiums, Crédit Agricole has made this sporting event a key moment in its communication. Elegant and friendly, we like!

Orange - one of the global sponsors of UEFA Euro 2016 - unveils a wordless spot like the one for Crédit Agricole. Featuring the idol "Zizou", the brand transforms supporters across Europe into "12th man ".

This is the name of the digital device Orange on football, a focus since taken over by other brands wishing to move away from the field. The goal? Free yourself from the constraints of sponsorship but also move away as far as possible from security issues that could arise during an event. 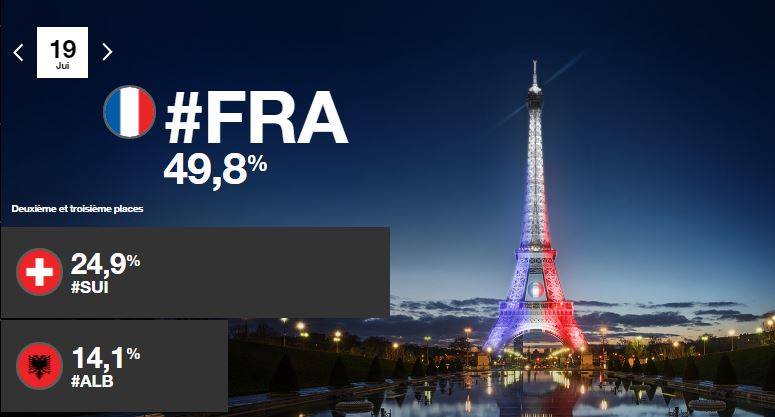 Finally, special mention for the “Show me your colors” operation which allows fans to vote for the team's colors to light up the Eiffel Tower. https://www.orangesponsorsyou.com/fr/show-your-colours/

Third film without words, third success for the WAC team. Volkswagen is the only top brand to put supporters AND its product at the heart of its communication. Put to the test by football fans, the cars prove their strength in this spot that makes us smile by DDB Paris.

FLOP 3 which leaves us speechless

With "The Footballers", PMU puts us in our eyes. The stars of the France team are there (#TeamGrizi), the special effects are well done… However, we find it difficult to understand the debauchery of resources. Note, the spot had been the subject of a teasing campaign suggesting the release of a blockbuster, widely relayed by the specialized press. Objective achieved for the sponsor of the France team? We take out our joker!

“Ding dong…” The TV screens of Turkish Airlines - global sponsors of UEFA Euro 2016 -, compiled in the video below, combine the codes of football and those of civil aviation. This simple juxtaposition seems simplistic. A light side but which suffers from the comparison with the licked spots of other brands and does not allow the airline to be installed as THE reference for the sponsor of the Euro. What do you think ?

No need for a media plan to talk about yourself! Puma experienced this during the Switzerland - France match where the Swiss team's jerseys were ragged 🙁 A disappointment that greatly amused Internet users, as shown by the few misappropriations below. Hopefully the brand will turn this badbuzz into a goodbuzz!

The boss of @pumafootball and its teams launched their new campaign tonight! #FRASUI #swiss swimsuits pic.twitter.com/ZliXP2kt94